Been busy this week on the campaign. Did a photo with Will Jones at the Turing statue in Sackville Park. 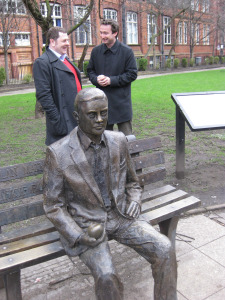 Please add your name below.

In the Commons, I have had research done by the Library which says that 75,895 men were convicted of Gross Indecency between 1894 and 2004, although the library could find no figures for Men who underwent Chemical Castration. I have asked the Justice Secretary if his department have any figures on this.

In the House of Lords, my colleague Lord Sharkey has submitted a question on the numbers of prisoners that have been pardoned in the past. If the argument is that a pardon is not possible because something was the law of the land at the time, then was this principle followed in these cases?

Finally, I uncovered a story in the telegraph from June 2010 when Teresa May said


“It’s not fair that a man can be branded a criminal because 30 years ago he had consensual sex with another man.