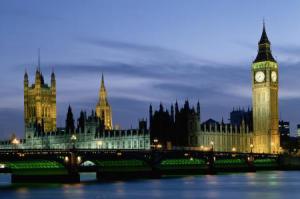 Under British law, an election must be held every five years but the Prime Minister can call the election any time within the period. When the Prime Minister decides to call an election, he goes to Buckingham Palace to ask the Queen to dissolve Parliament.  A royal proclamation, despatched from the Palace, dissolves Parliament and announces the date of the new Parliament and State Opening.

Once Parliament is dissolved, each seat in the House of Commons becomes vacant. MPs lose all the privileges associated with their position and cease to perform their former functions. Basically, until a new Parliament is elected, MPs do not exist. They and their staff are allowed access to Parliament for just a few days to remove papers and equipment from their offices.  Those who want to be re-elected must stand again as candidates.

The Government does not resign when Parliament is dissolved, however, and essential business carries on. Government ministers remain in charge of their departments until after the election result is known.

After dissolution, former MPs are no longer required to perform their duties representing their constituents and providing advice. They are free to do so however, at their own expense.

Both houses of Parliament will return on Tuesday 18th of May 2010.

I am still continuing to deal with urgent casework and should you require any help you can still ring the office on 0161 434 3334 or email me on johnsmleech@gmail.com