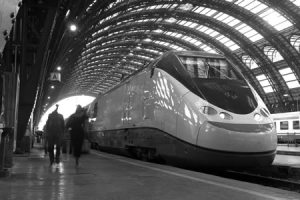 Image source: http://worksmarternotharder.wordpress.com/
I recently received a confirmation letter from Lord Adonis, Secretary of State for Transport about the Government's plans for a High Speed Rail network.

High Speed Rail has been around for a while now - we are all familiar with the high speed network in France and Germany and the benefits they have brought. I believe High Speed 2 can bring similar benefits to the UK as well. The traditional railway network has been allowed to become overcrowded and expensive, encouraging people onto cheap but much more polluting short-haul flights. A high speed network would help alleviate these capacity problems.

High Speed Rail services typically travel at or above 250 km/h (155mph) and under current estimates, this would put London within 80 minutes of Manchester. Considering current journey times, this is much better than flying. A well-planned high speed network will encourage people off planes and onto rail, saving a lot of time and cutting plane emissions.

Most importantly High Speed Rail typically has a very high passenger capacity - frequent long distance high speed trains have the ability to provide up to around 15,000 seats per hour in each direction into London, which far out-strips short haul flights in and out of London's airports. Capacity on the current network would then be freed up for more freight services or local and regional passenger services. It could also operate in a more capacity-efficient manner, with greater harmonisation of operating speeds and stopping patterns. The biggest benefit of all would be that, as passengers shift to High Speed Rail, short-haul domestic flights can be reduced, removing the need for airport expansion in the South East.

A further review will follow Lord Adonis' announcement and a full public consultation will be launched in the autumn. More information on High Speed 2's proposals can be found here, while the MENs coverage of the issue can be accessed here.