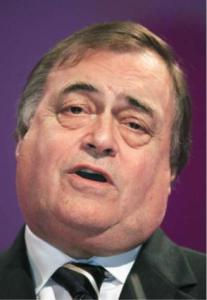 I see that the recently appointed Lord, (John) Prescott is campaigning to become Labour Party Treasurer. He is quoted by the BBC as saying that "The treasurer has got to say to the central body, you cannot keep on spending, we haven't got it". He has even talked about the possibility of the Labour Party going bankrupt.
But at least the party has been consistent - they have almost bankrupted the country by spending money we didn't have, and they have almost bankrupted themselves by spending money on the election that they didn't raise!

This consistency doesn't seem to go as far as Lord Prescott. While he may be preaching austerity for the party, his comments  contrast sharply with his comments about the Government - he's been critical of the Coalition Government trying to balance the books, opposing every spending cut. So what is it to be Lord Prescott? Austerity or splashing the cash? You can't have it both ways. But of course you can in opposition. Yes, you will have to cut spending in the Labour Party because you have to deal with the financial crisis facing the Labour Party, but when it comes to the economic deficit and the national debt - well that's someone else's problem.
So you can continue to play partisan politics, say how terrible the Government is and blame the Lib Dems.