This morning as part of Apprenticeship Week I was invited to see at first hand the work that apprentices are doing on the Merseybank estate as part of the refurbishment of Southway homes. It was great to see young people from the local area getting the chance to develop new skills on the job and have a real prospect of long-term employment in the construction industry.

Brussels and the Transport Select Committee

Posted by Pablo O'Hana | Updated 2010-02-04
In my capacity as Liberal Democrat Transport Spokesperson I was invited to Brussels with the Transport Select Committee and spent Tuesday and yesterday afternoon there.  We had a number of productive meetings, including one with Brian Simpson, the Labour MEP for the North West, and Chairman of the Transport Committee of the European Parliament.  We also met with the soon to be Transport Commissioner, and the Ambassador.

It was a very useful two days, discussing a wide range of issues from ports to aviation and rail to road pricing.

We also discussed the contraversial new full body scanners that have been introduced at Manchester Airport with the EU Transport Commisioner who didn't seem overly keen on the full body scanners and expressed concern that there wasn't a European wide agreed approcach.

There are certainly lessons that we can learn here in Manchester and I will ensure that these are fed back.

Speaking to the students at Parrs Wood High School 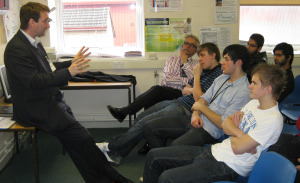 This afternoon I walked round the corner from my office to speak to sixth form politics and economics students at Parrs Wood High School. I'd been invited by one of the students to talk about how I'd become interested in and involved with politics and more generally about my role as an MP.

I talked about the future of university funding and the fact that both Labour and the Conservatives will increase tuition fees if they win the election whereas the Lib Dems remain commited to abolishing them. It was great to see the enthusiasm of the students and to see how interested they were in politics.

The Perils of Planning!

Posted by Pablo O'Hana | Updated 2010-02-01
This morning I met with people from Didsbury Baptist Church and the Planning Department to discuss the church's plans to build a small extension to the School Lane side of the church. At the moment the building looks fairly bleak from School Lane, and the plans could not be considered to be an overdevelopment, and would certainly be a massive improvement. Unfortunately the planners aren't too happy with the proposals. I hope that we can resolve this problem, because the proposed changes make a lot of sense.

Posted by Pablo O'Hana | Updated 2010-02-01
Last night I attended the licensing of Nick Bundock as Team Rector for St James and Emmanuel. The church was packed for the service that was taken by Bishop of Middleton and the Archdeacon of Manchester.

When Lib Dem councillor David Sandiford was Lord Mayor, Nick Bundock was his Chaplain. He now goes from being Team Vicar to Team Rector. As a Methodist I'm not entirely sure what the difference will be, but I'm certain that Nick will carry on his hard work in the heart of Didsbury.

Posted by Pablo O'Hana | Updated 2010-01-30
This afternoon I went to St Johns Catholic Primary School for the unwanted Christmas present "Swap Party". It was a great success with loads of people there. The highlight of the event were the "healthy" cakes, particularly the banana and poppy seed muffins. Well done to Claire Law for arranging the event.

We have thousands of people on the housing list, but Lorna Lodge is empty. Great Places made the point that south Manchester is not a priority for council investment in social housing, despite the waiting lists being longer in south Manchester and private rented housing being less affordable. Rehousing is the most raised issue in my surgeries, week in, week out. It's about time that is was made a priority.

The Lesbian and Gay Foundation - Outnorthwest

I recently did an interview with the Lesbian and Gay Foundation for their magazine, Outnorthwest. They quizzed me on my views on a number of issues ranging from the importance of the UK government challenging homophobia abroad to LGB and T issues in the upcoming general election.

You can read the article here or by clicking on the image above.

Posted by Pablo O'Hana | Updated 2010-01-29
Last night I attended the licensing and induction of the Rev Gisela Raines as Rector of St Paul's in Withington. The service was led by the Bishop of Middleton and the Archdeacon of Manchester. As usual the Choir was outstanding.

It has been "all change" across the constituency parishes since I was elected in 2005, and I will be at Emmanuel  on Sunday for the Licensing of Nick Bundock. Good luck to both of them in their new roles.

I have been to St Paul's on a number of occasions over the years. I was talking to Ray Jones last night, the husband of my former colleague and Lord Mayor Audrey Jones. He was telling me that he had been a reader at St Paul's for a mere 55 years! That's some dedication. Mind you, dedication runs in the family. Audrey was a Withington Councillor for almost 30 years.

Posted by Pablo O'Hana | Updated 2010-01-27
I am gutted. Last week City were lucky to beat United 2-1. This week they were lucky to beat us 3-1. We were 2 down when Tevez pulled one back, making the scores level over the 2 legs. Three minutes of injury time, and United score with a minute to go. Gutted. Absolutely gutted. Will I ever see City at Wembley for a major final? Who knows?