Speaking out about prejudice 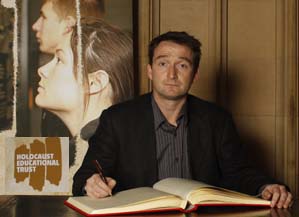 This week I signed a Book of Commitment in the House of Commons to honour those who died during the Holocaust.

Today marks the 67th anniversary of the liberation of Auschwitz-Birkenau, the Nazi concentration camp which is the site of the largest mass murder in history.

In the past few weeks, hundreds of commemorative events have been arranged by schools, faith groups and community organisations across the country, remembering all the victims of the Holocaust and subsequent genocides. This year, people will also be encouraged to take a stand against racism and prejudice today – and to speak out against hatred wherever they encounter it.

Manchester has a proud tradition of fighting prejudice- part of what makes Manchester a great place to live is that the vast majority of Mancunians are tolerent and respect the many different faiths and communities that live here.