"The Metrolink through south Manchester simply wouldn't have happened without him..." 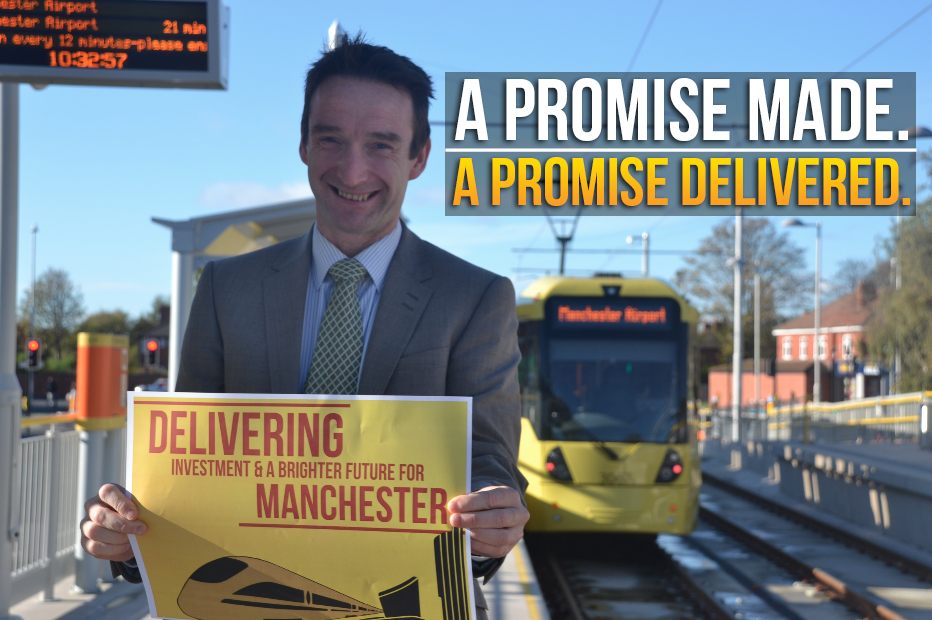 John has an unparalleled level of commitment and record of delivery in transport, highlighted substantially when, in 2005 he made an election pledge that if elected he would ensure that the much needed, but twice cancelled Metrolink would come through south Manchester. Fast-forward years of campaigning, lobbying, petitions, leaflets, and it's another promise delivered. The Metrolink is given the go ahead and the line through John's constituency opens. John was absolutely instrumental in securing the funding and delivery of the much needed link, not only through the constituency but the ongoing line to the airport - also promised and delivered under John's watch.

Because of John's passion and experience in public transport, he was selected as a member of the Transport Select Committee and later became a Shadow Transport Spokesperson in 2006. John Leech helped deliver funding for the ‘Let’s Get to Work’ scheme from the Local Sustainable Transport Fund which helped stimulate economic growth whilst reducing carbon emissions throughout the country. Thanks to John’s tireless campaigning Greater Manchester received the second highest allocation of funds in the country, significantly boosting travel in Manchester making it cleaner and more efficient. This scheme aims to take 26 million kilometers of car journeys off the road and turn them into public transport journeys.

Recently John backed the ‘One North’ transport plan complementing the HS2 proposals which will see a reduction in congestion and as much as 55% of journey times cut to a faster, more frequent interconnected rail work. John Leech has greatly improved Manchester’s transport by campaigning for the creation of the Metrolink and the Northern Hub.

John is committed to helping Manchester and the rest of the country become a pioneering example of green and efficient transport. He has fought long and hard to bring the Metrolink to south Manchester as John passionately believes that Manchester can outperform other cities as the hub for the North. John has backed Nick Clegg's campaign believing that the ‘Northern Hub’ project can create a tech hub to 'rival Berlin, New York and Shanghai'. £4.2 billion has been given for new Transport spending on top of the £5.2 billion announced. This investment of over £9 billion emphasises the dedication to transport and the failure of Labour’s delivery. John has been determined to ensure a modern efficient railway system that meets the needs of people and businesses.